Written by Richard Holden on July 28, 2020. In the Australian Financial Review.

The Australian economy is facing an unprecedented challenge from COVID-19, as last week’s budget update made clear.

In meeting those challenges we need to use every economic tool in our arsenal, and not hide behind outworn slogans of ideological battles from the 1980s such as “trickle-down economics”.

Australia needs aggressive fiscal measures to combat COVID-19, but we also need to reform both company and individual income tax rates. A good starting point would be to bring forward the second and third phase of the government’s income tax cuts, and to lower the company tax rate to 25 per cent right away for all businesses, regardless of size.

The backdrop for both fiscal measures and tax cuts is that the Australian government can borrow long term at less than 1 per cent per annum. So the real cost of $200 billion of fiscal measures is $2 billion a year in interest cost. Equally, the true cost of income tax cuts that cost $95 billion over a decade is 1 per cent of $9.5 billion a year—less than $100 million per annum.

We can afford to spend aggressively and cut taxes at the same time. 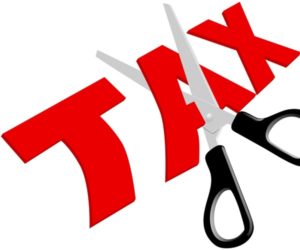 And we should. Australia has gone from having one of the lowest tax rates in the OECD—after first Hawke and Keating, then Howard and Costello cut it to 30 per cent —to one of the highest as other countries have lowered their rates.

We can like that or not, but as a capital-thirsty country we compete for capital with other nations. High relative company tax rates are a barrier to investment that creates jobs.

Whatever one thinks about the other policies Thatcher and Reagan enacted they got stagnant, overtaxed economies moving again.

Moreover, as I wrote on these pages in 2018, the best evidence on the causal effect of cuts in company tax rates is that about half the benefit accrues to capital and half to workers.

Indeed, the workers who benefit the most from tax cuts are young people, women, and lower-paid workers.

On the personal tax side, through so-called “bracket creep”, we have drifted into the inefficient and inequitable situation where, prior to the start of reforms by this government, workers on average full-time earnings were set to pay the second top marginal rate of 39 per cent (including the Medicare levy).

As economists of all stripes know, when you tax something you get less of it. In this case that is less labour supply—i.e. less work and fewer jobs.

The Treasurer twice invoked the legacy of Margaret Thatcher and Ronald Reagan in recent days. For some this is a lightning rod, invoking memories of union-busting, and cuts to the welfare state on both sides of the Atlantic.

But an important part of their legacy was to cut taxes from very high and economically crippling levels to more competitive rates that spurred economic growth.

Whatever one thinks about the other policies Thatcher and Reagan enacted—and I have been harshly critical of many of those—they got stagnant, overtaxed economies moving again.

Among all the suffering and misery, perhaps the one good thing to come out of COVID-19 is that we are moving to a new national narrative on debt and deficits.

Both sides of politics have been stricken by a severe case of balanced-budget fetishism. That has prevented many reforms.

In particular, the glacial pace of the Coalition’s “enterprise tax plan” that sought to cut company rates to 25 per cent over a decade was clearly because of concerns about the four-year forward estimate period of the budget.

The same accounting gimmick was at play with the three-phases of personal income tax cuts they announced.

We have come to understand that, while deficits do and always will matter, we live in an age of “secular stagnation” with low growth, low inflation, and low interest rates.

This was painfully obvious before COVID-19. Post COVID-19, economic growth is at even more of a premium, and the Australian government has the capacity to run deficits to get the economy moving again.

Much of that spending is and should be on income support to get households and businesses through the worst of COVID-19.

But—as every government report on the matter has said for a decade, and as the Reserve Bank of Australia (RBA) governor continues to emphasise—we need to boost investment and productivity.

Spending on social and physical infrastructure is an important part of that agenda. So, too, is having an internationally competitive company tax regime, and personal income tax rates that don’t act as a handbrake on the economy.

If I were Josh Frydenberg’s speech writer I might not have invoked the image of Thatcher and Reagan. But he was not wrong to do so. Australia’s low ingoing net debt to GDP and ability to borrow cheaply puts us in a unique position to be Keynesians and Friedmanites at the same time.

We can spend aggressively and cut taxes at the same time.

In fact, we must.