Property market predictions for 2021, article written by Larry Schlesinger in the AFR.

With interest rates near zero, the economy pumped up with massive amounts of stimulus and the virus all but eradicated from our shores, bullishness has returned to the housing market as prices have started to rise.

History will show that after the nation went into lockdown, national dwelling values fell a cumulative 2.2 per cent over the five months from May to September, led by falls in Melbourne and Sydney, according to CoreLogic.

But then, from October onwards as Melbourne emerged from its second lockdown and confidence returned to the market, dwelling values started rising again to end 2020 up 3 per cent, driven by pent-up buyer demand. 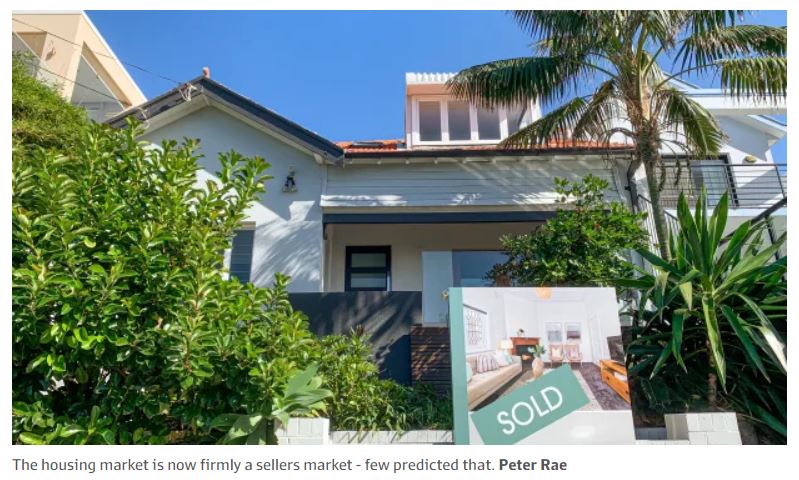 But which forecasts will prove to be most reliable? And, looking back, which predictions issued since the start of a nationwide lockdown at the end of March/start of April were closest to the mark?

One UBS scenario was right

The latest forecasts from economists at investment  bank UBS expect house prices to rise by 5-10 per cent for the year, but with the potential of gains of more than 10 per cent “particularly given the planned repeal of responsible lending [rules]“.

With the moderate scenario playing out, it could be said UBS was on the money.

Westpac chief economist Bill Evans and its senior economist Matthew Hassan are tipping 7.5 per cent rises this year and next (or 15 per cent over two years) on the basis of solid consumer sentiment and dwelling purchase intentions.

However, as recently as September, the bank said house prices would only bottom out in June this year (and then rise 15 per cent) having previously expected a 10 per cent slump between April 2020 and June 2021, revised back to a 5 per cent fall.

Mr Evans was also pessimistic on Melbourne and Sydney, when in September he forecast falls of 12 per cent and 5 per cent respectively between April 2020 and June 2021. Sydney house prices are up 2.7 per cent while Melbourne is down 1.3 per cent over the past 12 months, according to CoreLogic.

HSBC almost on the money

HSBC chief economist Paul Bloxham’s prediction of a 4 -6 per cent rise in national house prices in 2020 was almost on the money (they rose 3 per cent).

He’s tipping a more modest year of growth in 2021, between 0 and 4 per cent nationally with house prices expected to rise 2-6 per cent in Sydney, 1-5 per cent in Melbourne and 3-5 per cent in Brisbane.

Stronger price growth will come in the smaller cities and regions (which rose 6.9 per cent in 2020), says Bloxham, because of the work-from-home trend.

However HSBC is a lot more bearish on the apartment market where “rental vacancies for apartments (particularly in the CBDs) are rising, partly because there are fewer international students” with expectations unit prices could fall in Sydney, Melbourne in Brisbane or at best remain flat.

Veteran housing market analyst Louis Christopher, managing director of SQM Research, has a base case scenario (assuming JobKeeper is extended to September and a progressive vaccine rollout) of capital city house prices rising 5-9 per cent in 2021 with the strongest growth happening in Perth (8-12 per cent), Sydney (7-11 per cent) and Adelaide (6-10 per cent).

While SQM did not (like everyone else) predict a pandemic, it did envisage a recessionary scenario where the cash rate was cut to zero, quantitative easing began and there was government stimulus – as did happen.

Under these conditions, SQM predicted house prices could rise as much as 3 per cent or fall as much as 1 per cent, an accurate forecast it turned out.

Back in April, SQM laid out two other scenarios, one that saw the market recover quickly if there was only one wave of the virus and another where the market could crash by up to 30 per cent if a second wave hit and the government could not respond economically.

“The media grabbed onto our second darker scenario at the time but I can only stress this was never our base case and we did not overly promote it compared to the former,” Mr Christopher said.

“We also reiterated that our [recessionary] scenario was in play [at the time].“

Speaking of accurate scenarios and forecasts, The Australian Financial Review columnist Christopher Joye wrote on April 24 that “home values are unlikely to fall materially” in contrast to the “more emphatic and universally held belief…that Australian house prices will slump”.

In his “central case” Mr Joye said home values would “either move sideways or at most fall by up to 5 per cent over the next three to six months, after which the robust cyclical boom will resume”.

No so great was the prediction by the country’s largest home lender, the Commonwealth Bank of Australia, which predicted in mid-April that residential property prices could drop by 10 per cent over six months or 20 per cent on annualised basis, led by steep falls in Sydney and Melbourne.

Most bearish of all was Digital Finance Analytics director Martin North who said in April there is a 60 per cent chance of house prices falling by between 30 per cent and 45 per cent due to high unemployment.

If you enjoyed the Property Market Predictions of 2021 and you want learn more about property, get started on your wealth building journey or improve your structure with money… then please contact us and we can help – even if it is sharing our latest ebook that you can learn the ‘complicated basics’ in a simple and easy to understand manner.